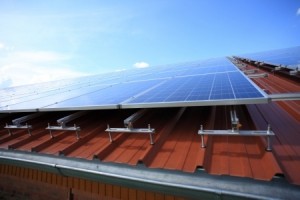 On June 8, the Scientific American reported on the success of an interesting new financing structure that is increasing the deployment of rooftop solar. Rooftop solar often makes good sense for society as a whole, but it has logistical and financial challenges. Utilities are skeptical because rooftop installations can be a money loser that is hard to integrate into the grid, and companies like Solar City that lease panels to building owners generally require good credit. San Antonio’s municipal utility, CPS Energy, thinks it may have found a solution in a new program called SolarHost.

SolarHost allows any homeowner in the utility’s territory to apply to be a free “host” for rooftop solar panels. Homeowners fill out an application with a partner company called PowerFin, and then if the home makes sense for the program CPS Energy will buy, install, and maintain solar panels on the home’s roof. In return, the homeowner will get a discount on their utility bill. The discount is actually relatively small, about $20 per month. CPS Energy also tells customers that by signing up they “are helping CPS Energy and our city meet important renewable energy goals.” Despite the limited tangible benefits, by October 2015 CPS Energy announced that it had filled its capacity for the pilot program.

It is early, but this type of “utility-owned distributed generation” seems to be solving some problems with traditional rooftop solar. It is more favorable for utilities than net metering, where utilities basically roll a customer’s meter backwards to pay the customer for electricity generated by the customer’s solar panels. Rather than being forced to pay for net metering a handful of randomly-placed customers that own solar panels, utilities using SolarHost’s system could roll out and then coordinate the output of panels on their own terms. SolarHost also places minimal burden on a homeowner, which makes it easier to get customers to sign up in whichever area a utility decides to target.

As a myriad of new options for buying electricity proliferate, many customers are better off asking a professional to find the best deal. You may be surprised by the options available to save money on utility service. If you are interested in learning more, please contact AGR Group Green today for a free consultation.